I don't collect all and any 7T32's as such, the exception being a couple of Seiko 7T32-7F80's and the Orient / Racer / Puma HFA BreitBling clones, which let's just say I have a certain affinity for - something of an understatement.

I'd last written about them in the old forum's Don't be shy to show us your 7T32 thread, back in May last year. Rather than clutter up another generic 'Show us your 7T32' thread on the new forum, I thought I'd create a dedicated topic.


It's continued to grow since then and I'm now starting to fill up a second similar (12-slot) aluminium collection box.

My biggest relatively recent catch was a batch 4 NOS Orient HFA's off Yahoo Japan in December last year. As you may gather from the similarity of the photos, they were listed by the same seller. Although theoretically NOS, all had been fitted with non-original generic replacement bracelets. The one (or two) that I was most interested in were the dark blue dialed Orient HFA001-70's. Despite all the variations, I didn't have an example of that dial colour in my collection.


I had a fair bit of competition from another bidder on those and in my determination ended up winning both !


Then there was this light grey dialed HFA001-70, which seemed too good to pass up at the price.


In case you're thinking you've seen me post one of these before, you'd be absolutely right. Coincidentally, that example was also fitted with a non-original two-tone generic replacement bracelet. It was in fact the very first BreitBling HFA 7T32 I ever bought, that effectively kick-started my 'little' collection. See my post here, from nearly 7 years ago.


Then there was this blingy gold-tone HFA901-70. I already had a NOS example of this with a white dial in my collection and the same dark black-ish coloured dial in a two-tone case, but decided on the basis of 'in for a penny; in for pound'.

For the moment, therein lies my problem - finding suitable period appearing (ideally Orient branded) 19mm leather straps for them. Not just them, but also my Orient and Racer J39's many of which also have 19mm lug width fittings.

I got lucky in January; I spotted this dark blue Orient 19mm strap on eBay, that once belonged to another HFA model.

There have been a couple of other Orient and Racer HFA's I've bought since. But I don't snap up everything that I see.

I passed on this one. This well worn Racer HFA019-70, fitted with a generic replacement bracelet was listed on Spanish classifieds site Todocoleccion in December. Can't remember exactly what the asking price was, but it was far too much for the rather battered condition. IIRC, the seller later listed it on eBay and it was sold for an undisclosed best offer.


I must admit I did think about it briefly - but dismissed the idea, on the basis that I didn't need yet another restoration project. I already have the Orient HFA042-70 and Puma Z7A001-70 branded variants, with the same black dial with gold sub-dials in my collection, but not the Racer HFA019-70 variant. You've gotta draw the line somewhere.

Speaking of the Puma Z7A001-70, which if not my personal favourite, is probably one of the scarcest and hardest to find BreitBling 7T32 variants, here's a couple of gratuitous older photos of mine, which I purchased as a non-runner in 2015:


I was pleased for fellow Seiko collector Alan Symes that he'd found himself an example, per his recent Instagram post. 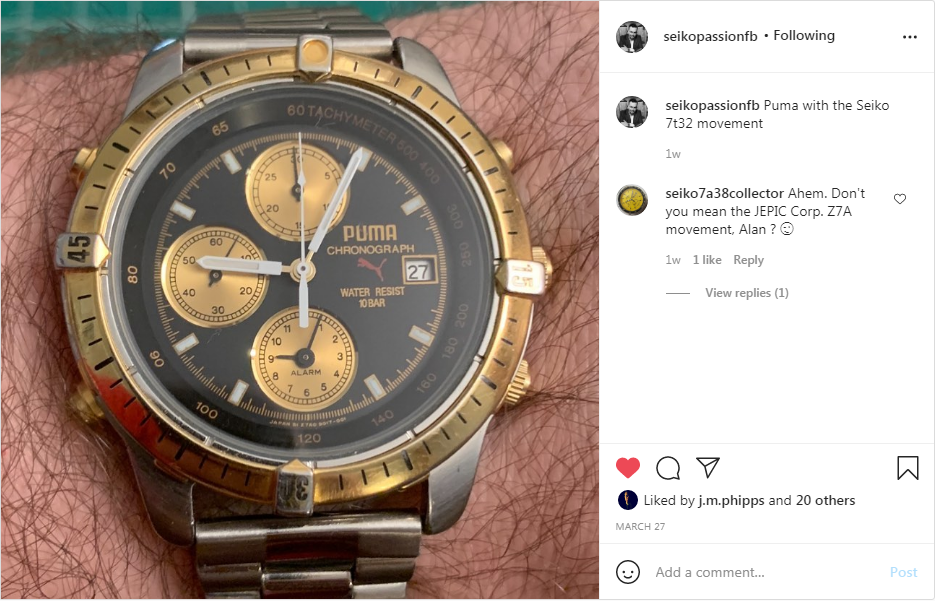 Here's another funny coincidence (except I suspect it was no coincidence).

It also serves again to demonstrate that despite my affinity for these 7T32 BreitBling clones, I don't jump to buy every single one I see, regardless of condition, particularly if they're over-priced.

I was hoping by now that this new website / forum would have gone live. I don't know if it's Webs still dragging their feet or what constitutes an acceptable timeframe for a .com domain transfer. Despite the fact that I hadn't posted on the old forum since 28th January, I'm still receiving email notifications for new member applications from Webs. I've probably received more than two dozen in the last month. Some of them appear to be spammers, which I've deleted. However, I've kept a good portion of them (in my email inbox) and intend to send out invitations to join this forum in due course. I received yet another this morning.

The associated email address was info@r-suiza.com. Intrigued, I headed straight for their website: www.r-suiza.com. Transpires that RELOJERÍA SUIZA are a long established B&M watchmakers in Tenerife, the Canaries. The prospective new member chose a username of Pedro, the same as the proprietor, master watchmaker, Pedro Rodriguez Chinea. Naturally, I'm immediately wondering if he might have a Racer J39 for sale. So I ran a quick search on Todocoleccion. What should come at the top of the results, but this Racer HFA018-70, which had been listed earlier this morning !!


Once you've eliminated the duplicates, there are a total of 11 different photos embedded in the description. Of those, many are quite similar, so I'm just going to upload 4 of them:


This watch is interesting, because it's subtly different from the NOS condition black-dialed Racer HFA018-70 that I already have in my collection. It has gold-plated hour and minute hands and white chronograph and alarm sub-dial hands. Whereas my similar example has white hour and minute hands and red chronograph and alarm sub-dial hands. Here's a rather nice wrist shot of it that I posted in the WRUW thread, not long after receiving it, back in January 2020.


There is one other less subtle discrepancy between these two slightly different sub-variants of Racer HFA018-70 ....

Coincidentally, it came from another seller on Todocoleccion, also based in the Canaries. Whereas I might consider grudgingly paying that much for a Racer J39, no way for a HFA. You've got to remember these are just re-branded 7T32's - of limited appeal to most collectors.

Indeed, over the next couple of months he did keep going, albeit gradually ....


Until a week or so, this notification of a 70% reduction (on the original asking price of €195) landed in my email inbox.


Except this time, it wasn't a discounted Buy-it-Now price, but the opening bid price in an auction (with same item #).


I suppose I could have gambled on nobody else bidding and waited to see if the Spanish seller reduced it further, but I suspect that he'd never have dropped his price by 80%, as I'd joked in this earlier post. Besides, by now impatience had got the better of me. I bid on it in the final seconds, winning the auction for the opening bid price of 58.50 Euros.

That RACER HFA018-70 arrived in this morning's post. Here's a slightly differently angled wrist shot to the one I posted in the WRUW thread, which hopefully shows the gold dial printing better.

I finally got around to fitting that Orient blue shark strap this afternoon, to the ex-Yahoo Japan Orient HFA0001-70, which I'd earmarked it for. Although appropriately 'period correct,' I'm not entirely convinced it works. The dial is a much deeper shade of blue.

I caved in and bought another blue dialed BreitBling 7T32 clone yesterday: an Orient HFA701-70 (with some issues).

It had been on my Buyee watch list for nearly a week (having been re-listed once), but another ending soon notification reminded me and I did the deed this time. Yahoo Japan link: https://page.auctions.yahoo.co.jp/jp/au ... 1000229572


The constant seconds hand has fallen off and is floating loose around the dial - and it was typically described as 'JUNK'.


If I can't fix it, I'll break it up for spare parts. It was cheap enough - for the equivalent £20-odd Quid.

The postman delivered the Buyee package containing that Orient HFA701-70 late this morning. It had taken just over a week to get from Heathrow, having spent 5 days at Langley HWDC / UK Customs. Given the delay, I was half expecting a Royal Mail card advising me that there was £2 Quid VAT (+ £8.50 clearance charges) payable, but they didn't dare stoop that low. They must have spent some considerable time thinking about it, but I got off scot free once again.

The watch itself actually looks better than in the YJ seller's photo. That errant second hand hadn't moved very far.

It had been listed in typical Japanese fashion as 'Junk', but there was also a 'get out clause' caveat in the description:

However, it is not working now, and we cannot guarantee that it will work by replacing the battery and it is in the above state, so please treat it as junk.

So I wasn't quite sure what to expect. When I unscrewed the case-back, the movement back-plate looked remarkably clean and there wasn't any battery fitted. But then I noticed something dark floating around loose in the bottom of the battery well, sort of 'fishtail' shaped. You guessed it.

It doesn't take very much of a battery leak to kill a Seiko 7T32 (nor Orient HFA) circuit stone dead.


There are more examples of similarly damaged or destroyed PCB's to be found on page 2 of this old forum 7T32 thread.

It may have seemed a bit excessive at the time, but I continue to congratulate myself on my plucky bulk purchase.

Here's a photo of the re-assembled HFA00 movement, which actually didn't need very much in the way of cleaning up. You'd never guess it had suffered a terminal battery leak.


.... and a slightly different wrist shot to the one I just posted in the WRUW thread: