The increasing costs of 7Axx ownership

The increasing costs of 7Axx ownership

Having actively collected Seiko 7A38's for over 10 years, all the while monitoring their prices, I can certainly attest that they've increased significantly, particularly over the last 5 years, as interest spreads to more collectors. Much depends on the model and its perceived desirability. Prices for some have doubled, others tripled or quadrupled - even worse. One such is the relatively common stainless 7A38-7020 SAA009J and its US export equivalent the 7A38-7029 SAA013J. Unfortunately on the old forum, I never got around to creating a 7A38-xxxx model specific thread for this enduringly popular variant. It's a pity, because it would have made interesting (if nostalgic) reading at today's price levels.

I suspect the growing fervour is partly due to the 'Royal Oak' moniker that the watch has acquired. A nickname (and a complete misnomer) which I believe emanated from the SCWF, as so many do. The increased prices being asked of late are principally due to speculators and greedy profiteering eBay re-sellers, like Simone, Giuseppe, hattori_cy and lately quartzwerk, who buy low with the deliberate intention of reselling to mug punters at vastly inflated Buy-it-Now prices.

What prompted me to start this topic was this post made on Instagram yesterday by one ewandalton.
Note in the latter part of his caption, the poster bemoaned: Pity it cost me 3x what I sold the last one for... 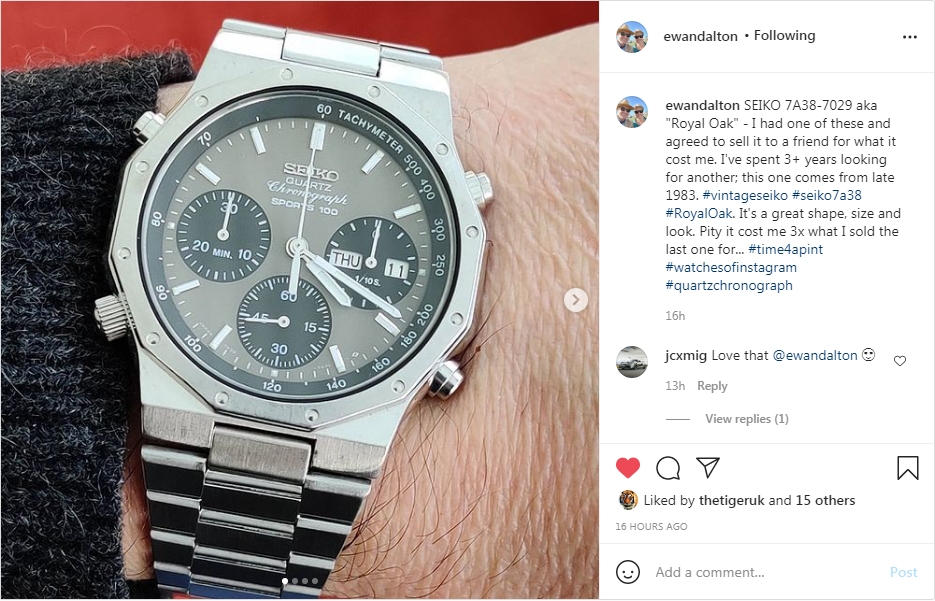 In case you didn't recognise the name, Ewan is a regular contributor to both SCWF and OmegaForums, where he posts as ewand. He was also a member of our old forum and, referring to his previous 7A38-7029, seeking advice on its bracelet, started this thread in the Tech Tips section, back in November 2017:


Ewan also contributes to vintagewatchadvisors.com where he has written about a friend's 7A38-7029 in this blog article.

From the other photos in his Instagram post, it's not difficult to figure out where Ewan bought his latest 7A38-7029. It was a 7-day UK eBay auction, by a seller from Northern Ireland, with an opening bid price of £120, which ended on 8th February, selling for a hefty £455 after 20 bids.


If you check the eBay bidding history, in order to win the action, it would appear that Ewan was prepared to pay even more for that 7A38-7029 than he actually did. He placed a second, presumably higher snipe bid in the closing seconds.


I'm fortunate that my collection includes half a dozen stainless 7A38-7020's and 7A38-7029's, the majority of which are in close to mint condition. Thankfully, I purchased most of them years ago, when prices were much lower. Checking my records, the last 7A38-7029 that I bought (as a complete watch, as opposed to a salesman's sample case) came off eBay in the States in July 2019 for $299 as a Buy-it-Now. The most I've ever paid in an auction for either variant, was in May 2018 - an almost mint 7A38-7020, still with the case-back protection largely intact, for 226 Euros off eBay Germany.

I documented it the Show and Tell - your newest incoming 7Axx thread at the time.

So I really didn't need another, particularly as this example appeared to be in no better than average worn condition. But it was in the UK, meaning no 20% VAT, so I thought I'd take a punt. In fact, I placed the opening bid - £123.45. The highest bid I placed was £155.67 (shown at the bottom of the screen print), at which point I thought 'Nah'. Enough is enough, especially when it later started heading towards £200. My final bid was approximately a third of the price Ewan bid to eventually win it. This was a no reserve auction - not some greedy profiteering eBay re-seller, demanding a ridiculously marked-up Buy-it-Now price. In some respects, Gentlemen, you only have yourselves to blame.