Yet another profiteering (UK) eBay seller to avoid !!

Yet another profiteering (UK) eBay seller to avoid !!

Funnily enough, it was this UK eBay seller's listing of a well-worn 7A38-7190, fitted with a non-original replacement bracelet, that I'd written about in this other thread, that drew my attention to his other recent re-selling activity.

Regardless of the prices he's paid for them (usually purchased from Europe for around 150 Euros), he's currently listing all three of them with the same greedily marked-up Buy-it-Now price of £355, using the archetypal chancer's favourite adjectives like, beautiful, superb and stunning ! All that's missing is 'awesome'.

Here's links to the listings:

I can't be bothered to post screen individual screen prints, but here's the current summary of his 7A38 listings:

Here's where he bought them and what he paid:

The 7A38-7240 which re-seller hollizaak007 listed this lunchtime was listed by French eBay seller 2015-mokra in the last week of May with a reasonable Buy-it-Now price of 169 Euros. I'm a bit surprised no-one had purchased it before.


The well-worn two-tone 7A38-7190, fitted with an incorrect non-original bracelet, which I'd already written up in detail in the appropriate thread, was listed by an Italian eBay seller on the 30th May, initially with a Buy-it-Now price of 220 Euros. He later reduced it three times in 10 Euro decrements to 180 Euros. Throughout the listing duration, there was also the option to make an offer, but nobody appears to have exercised it. On 10th July, the seller ended the listing as no longer available, having presumably succumbed to a 'back door' offer from hollizaak007.


Although the Italian eBay seller didn't include a photo of the case-back showing the serial number, the incorrect Seiko replacement bracelet fitted certainly matches. Both bracelet and clasp appear to have been re-brushed and polished.


The stainless 7A38-727A was listed briefly on Saturday afternoon of 19th June, with a very reasonable Buy-it-Now price of 160 Euros and the option to make an offer. During the 3½ hours it was live, 40 other people had viewed the listing. Checking the eBay Purchase History reveals that opportunistic profiteering re-seller hollizaak007 was in fact the only person to make an offer.


The case-back serial number 870116 (and the long scratch, which he's conveniently obscured with the clasp) matches.

I should have known this forum a few hours ago..
I bought the 7A38-727A 'cause it's my birth year and the price was not too high (considering what can be seen).

Does the watch conform though?
Top

Sorry to have taken the shine off your purchase. Don't be too annoyed with yourself, you're not the first and certainly won't be the last to fall victim to profiteering re-sellers like hollizaak007. There are so many of them active on eBay. Still, at least you didn't pay the full Buy-it-Now price of £355. (I'd previously overlooked to mention that when he first listed it on 2nd July, he was asking £375).


Although there were 30 watchers, the eBay Purchase History shows that you were the only person to make an offer(s).


In terms of conformity, the watch appears to be a correct and original example of the 7A38-727A SAA131J. The only detraction is that scratch on the case-back, which the re-seller appears to have deliberately obscured in his photos.

For future reference: although nominally a European export model, the 7A38-727A SAA131J appears to have been targeted specifically at the German market - so it follows that eBay Germany is normally the best place to search for one, where they can sometimes be picked up relatively cheaply (as demonstrated by hollizaak007). Both mine came from there: the first (a long time ago) was in very good condition, the second more recent, was an almost mint head, fitted with a horrible generic expanding replacement bracelet (which I naturally replaced with the correct Seiko p/n B1615S, donated by a scrapped 7A38-7270). Checking my records, I paid €53.60 in June 2009 and €131.00 in February 2019 for them respectively. I'll post a photo of one in the WRUW thread presently. Done.

I paid £340. I wasn't looking for this specific reference (I prefer long indices and framed subdials) but the year 1988 + nice condition made me thought I got to take the first one I see that is not €1000!
Top

The dial batons on the silvery-white 726L dial (which incidentally is unique to this stainless 7A38-727A variant) aren't what I'd consider particularly short. Coincidentally, there's a stainless 7A38-727B SAA149J (another fairly obscure UK market variant) which has a different off-white 723O dial with shorter non-lumed batons.
Top

He may have got lucky with that stainless 7A38-727A, but profiteering UK eBay re-seller hollizaak007 clearly has much to learn about the comparative values of less popular Seiko 7A38's. Earlier this evening he listed this only average worn condition gold-tone 7A38-7289, with what appears to have become his standard Buy-it-Now price of £355 regardless.


He also appears to be casting his net wider to acquire his sordid stock in trade (encroaching on flobaca's territory*).
Here's where he bought it last month off eBay in the States for an undisclosed best offer.


Here's three of the original US eBay seller's five photos.

Profiteering US eBay re-seller flobaca, whom in better times, one might possibly have expected to buy this 7A38-7289, has himself been re-listing a gold-tone 7A38-7280, which I'd posit is a slightly more desirable variant in better condition, since the beginning of June, asking $175 - still without success.
Top

It would appear that there are other parallels which might be drawn between long-time profiteering US eBay seller flobaca and comparative newcomer to the 7A38 scene, UK eBay re-seller hollizaak007. Indeed, it may have been his earlier attempts to climb on the more lucrative 7A38-702x 'Royal Oak' bandwagon that had confused me a while back.

Readers may recall this post I made at the beginning of July:

Seiko7A38 wrote: ↑Wed Jun 09, 2021 7:17 amThere's also another possibility pending, so I give you my prediction for one of his future offerings.

Forgive me readers. With hindsight, I seem to have got that prediction wrong.

Whereas that stainless 7A38-7020 certainly looked like typical 'potential flobaca fodder', I now believe that suitably cheap example was snapped up by another, as yet unidentified, competing buyer. Indeed they may have beaten flobaca to the punch on two occasions.

Not wishing to make excuses for my earlier confusion, it was directly due to eBay's increased encryption of buyer ID's as displayed on the purchase history screen. With hindsight, I now believe in those two instances, the encrypted buyer ID (that I incorrectly assumed belonged to flobaca's alter ego zenodass44) may in reality have belonged to hollizaak007. They share three common characters: a, o and z. 'Z' being the one that had thrown me a curved ball at the time.

Whereas I haven't seen hollizaak007 listing a 7A38-7020 or 7A38-7029 yet, unless I've missed a quick sale, he's certainly considered buying at least one recently. Of more anon, once I've had some food - call it a very late lunch.

This stainless 7A38-7020 in average worn condition, the first on many last month (but unlike the majority, without the 'Royal Oak' misnomer in the title), was listed by a UK eBay seller on 9th July as a 5-day auction, with an over-optimistic opening bid price of £350. I didn't bother taking a screenshot of the listing, but here's half of the seller's 10 photos.


WatchCount.com's look-up tool shows the listing was live for just over half an hour, that Friday lunchtime, during which time it received only 13 views ....


.... before selling for an undisclosed best offer:


The eBay Bidding / Purchase History shows a slightly confusing encrypted buyer ID of 2***a (rather than o***a or z***a), but their feedback rating of 1874 exactly matches the current feedback number of UK eBay re-seller hollizaak007.


That became academic, when whoever the buyer was (ahem) reneged on the transaction. Given his affinity for listing Seiko 7A38's @ a preferred standard marked-up price of £355, there clearly wasn't enough profit margin to be had.

It sold again, at lunchtime today, for another undisclosed best offer (presumably less than £275):


Unfortunately, for reasons best known to the seller, this was a private listing, with buyer's identity protected:


Time will tell whether the 'mystery' buyer turns out to be who I strongly suspect it may well have been.

The 7A38-7240 which re-seller hollizaak007 listed this lunchtime was listed by French eBay seller 2015-mokra in the last week of May with a reasonable Buy-it-Now price of 169 Euros. I'm a bit surprised no-one had purchased it before.

It may have taken him a couple of months, but late yesterday evening, profiteering UK eBay re-seller hollizaak007 eventually found himself a mug punter buyer for the ex-2015-mokra 7A38-7240. It sold for an undisclosed best offer.

I've just spotted another prime example of greedy wilful profiteering by another UK eBay seller victor-copi0, who uses similar mark-ups to hollizaak007. Rather than start another thread, I'm going to add it onto this one, because the title is still appropriate. This well-worn stainless 7A38-7190 was listed earlier this afternoon, by the aforementioned grubby little shark, with a Buy-it-Now price of £369, which is frankly laughable given the condition - and especially bearing in mind what he paid for it himself.


Naturally, he's given it the obligatory parallel plug on Instagram, but evidently words failed him. 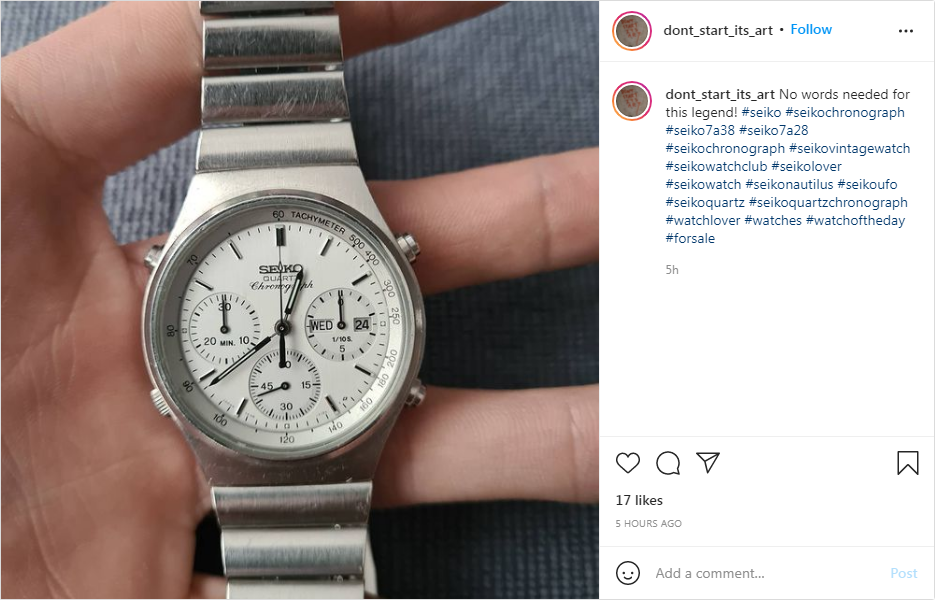 I can certainly think of a few !

I had to laugh at the pretentious user name: don't_start_it's_art.