Slightly off-topic, even for this forum section, but it's so different - indeed literally a bit 'left field', I thought it worthy of a mention. Yesterday, eclectic US Seiko and Citizen collector, Bob Lambert posted this Citizen chrono' on Instagram. 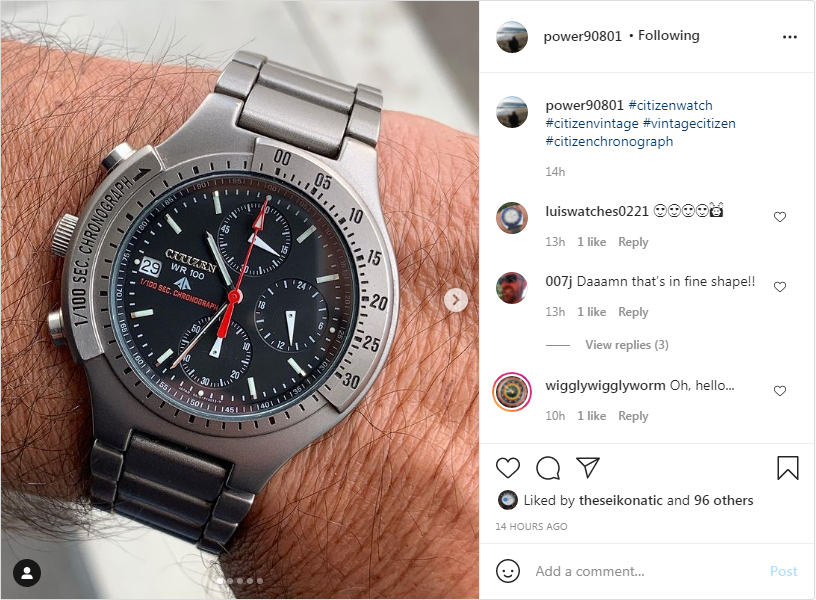 
The caption doesn't state what model it actually is, nor any other useful information. Bob had also posted two of those wrist shot photos in yesterday's SCWF WRUW thread. His caption there reads: 'From the Fiskadoro collection

Bob's 'flaming' clue led me to his source and the watch's identity. Earlier this month, the previous owner, SCWF member Fiskadoro had posted this wrist shot in another daily WRUW thread on 6th August. I'd failed to spot it before today.

Searching on the model number, I found another earlier SCWF WRUW thread post of the watch he'd made in June 2020. Comparing them, it appears to be the same watch, but he's since touched up the bezel minute marks @ 10, 15 and 20.

Despite its weirdness, I must admit I found the watch strangely attractive (it's probably that red chrono' hand fetish).

Intrigued, I did a bit more googling and found another posted on SCWF. Not quite the exact same variant, in that this example has a white dial, but it's the same Citizen model number 0610-F10008. The FS advert on SCWF Trading Post by an Italian 'Special Member' Jeffrey (a.k.a. Max) dates back almost 5 years to September 2016:

More recently another white dialed Citizen 0610-F10008 sold on Yahoo Japan at the beginning of August for 12,199 Yen.


It was listed by a 'Store' seller as a 4-day auction, with an opening bid price of 7000 Yen. 6 bids were placed taking it to 11,090 Yen, which adding the 10% Japanese Sales tax amounts to 12,199 Yen equivalent to approx. $111 USD / £81 GBP. The 9 photos were small (only 480x480), so I'll not bother uploading them. A google translation of the Japanese seller's description doesn't tell you much more: only that it's 38mm diameter and typically had a short bracelet.

If you google images of Citizen Cal. 0610 chronographs, you'll find the majority of models have a conventional layout, with sub-dials @ 6, 9 and 12, the date window @ 3 and crown and pushers on the right side of the case. The distinctly quirky F10008 variant effectively uses the same movement turned 'upside down', rotated through 180 degrees, placing the crown, pushers and date window on the left hand side (incidentally also swapping the functions of the chronograph sub-dials @ 6 and 12 o'clock). Both versions of the movement are shown on page 4 of the Citizen Technical Manual.


Reading the section on chronograph operation reveals the usual electronic wizardry you'd only expect from Citizen.


Having done so, I'm assuming it must be the central red sweep second hand which acts as the 1/100 second indicator, in conjunction with the 0-100 dial ring scale, but that it only whizzes around for the first 61 seconds, before slowing down.
I found a YouTube video of a conventionally oriented Citizen Cal. 0610 chronograph, showing the central hand spinning round at one revolution per second, but unfortunately the uploader stops it after only 15 seconds, rather than let it run on past 60. (Probably just as well, given the bird screeching in the background).

Still haven't figured out the purpose of that fixed third of a bezel, marked from 00 to 30, but it's likely connected with the inner 0-100 scale. Undoubtedly, the weirdest thing about the 0610-F10008 variant is that it was obviously designed with left-handed people in mind - to be worn on the owner's right wrist and the chronograph buttons to be operated by the their left forefinger. Which must make it fairly unique - at least within the genre of quartz analogue chronographs.
Top
Post Reply
5 posts • Page 1 of 1