Well, actually it was only 8 years ago, on the old archived forum, where I started a topic with a slightly unusual title:
Galaxy 7A38 by Samsung (actually Orient) - an interesting rarity

The incorrect reference in the title to Samsung (which I wasted some time investigating), comes from a 5-day auction listing by Korean eBay seller Kwonbax, which briefly appeared on November 10th, 2013, before being ended early:

If you haven't read the thread, to very briefly summarize, it began with bitter disappointment and rapidly turned into a series of acrimonious exchanges between myself and erstwhile fanatical Australian 7Axx collector Stuart Lennard, who 'back-doored' it (after I'd already placed the opening bid). Less than a year later, Stuart suffered a major health scare and began selling off his once impressive Seiko 7Axx collection at a faster rate than which he had accumulated them. We subsequently buried the hatchet and in May 2015, he agreed to sell me the Galaxy 7A38 that I'd coveted so badly.

Although they're extremely rare, and having become something of a 'grail' before I finally acquired my example, I can't honestly say I'm that enamoured with it. Apart from the bracelet being too short for me to wear, it's not a particularly attractive design, compared to some other Orient and Racer J39's. Here's a few photos from page 2 of that thread:

A particularly pointless feature of the design is a 'diver's style bezel complete with thumb grips, which doesn't rotate !

I must admit, having already had one Instagram account deleted and recently experienced annoying problems with my current one, I've begun to lose interest in uploading more photos. However, I do find it useful for discovering new stuff.
If nothing else, at least once per day, I still habitually run searches on #seiko7a38 and #7a38. This morning, the latter search fetched up something new, interesting and extremely rare - a sighting of another variation of Galaxy 7A38 ! 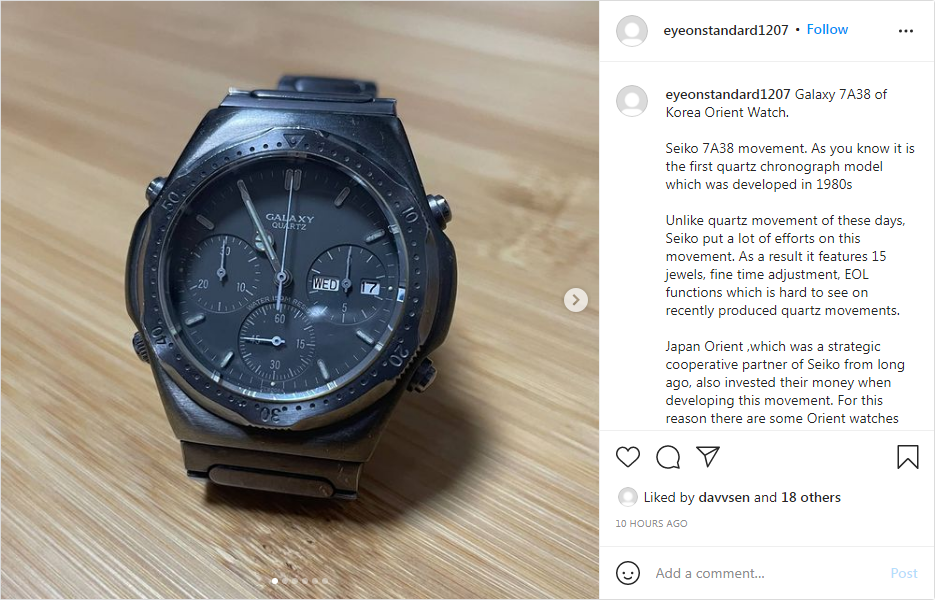 On first spotting the post, I thought it was the same watch, but this one has a black or very dark grey dial with white printing, as opposed to mine which has a dull light grey dial with black printing. I must say I prefer this darker version.


His close-up photo of the case-back shows it has suffered a similar amount of wear to my example, with plenty of light scratches criss-crossing the engravings (or should I more correctly say 'raised relief', but thankfully the Olympic logos and text are still legible. (The detail had been almost completely obliterated from my watch's original case-back.)

The Korean Instagram poster eyeonstandard1207 appears to have an excellent command of English and per his profile specializes in collecting Japanese and Korean-manufactured Orient and Galaxy branded watches.


I don't think I've seen anyone write such a lengthy well-detailed caption before. Here's the full text (slightly edited):


Galaxy 7A38 of Korea Orient Watch.

Seiko 7A38 movement. As you know it is the first quartz chronograph model which was developed in 1980s.

Unlike quartz movement of these days, Seiko put a lot of efforts on this movement. As a result it features 15 jewels, fine time adjustment, EOL functions which is hard to see on recently produced quartz movements.

Orient Japan, which was a strategic cooperative partner of Seiko from long ago, also invested their money when developing this movement. For this reason there are some Orient watches equipped with 7a38 movement produced by Seiko.

I think there were some 7A38 movements which was also flow into Orient Korea with the help of Orient Japan. (both company was also strategic partner like Seiko & Orient) and I would like to introduce one of them.

Brand name Galaxy is Orient Korea's luxury line up. And this model was produced to celebrate Korea's 88 Olympic games. (You can see Seoul 1988 and Olympic logo engraving on the case back).

As it is a so rare model, I could not find any information about it. But with the help of Orient Korea's service center, I could find a catalogue about this watch.

Unlike Seiko's model which has mineral or hardlex crystal, this Orient galaxy has thick sapphire crystal so despite the long period there are no minor scratches on it.

The chief of Orient Korea service center said: "We were the Korea's best watch making company. We even participated in Basel World and the response of the buyers were good. But things did not work out and the company's fortune has declined from 1990s and so was the Korea watch industry 's destiny. There are no more Korean watch company who can make these kind of good watches. I miss that day......"

When I heard it I also feel sad about it. And I hope one day this company could restore its glory in the future.

When I wrote 'Two more variants spotted' in the topic title, the other, a two-tone version with a gold dial appears in the two photos of catalogue pages that he's also uploaded to his post:


Unfortunately, in doing so, both photos have been automatically cropped to Instagram's standard square (1080x1080) format and the captions to the right of the small image of the two-tone variant have been chopped off.
Top

Naturally, out of curiosity, I DM'd the Instagram poster eyeonstandard1207 asking a few questions. He informed me the missing model number / sales code for the two-tone gold dialed variant was CC-6002A. He later kindly emailed me his original full-sized photos. Here's the two-tone page:


The catalogue images of the Galaxy CC6002A and CC8002A both show retail prices of ₩170,000 (South Korean Won) in 1988, which converts to a fairly meaningless $145 at today's exchange rate. But using this Korean inflation calculator gives a current equivalent monetary value of approx. ₩531,000, which converts to a rather more realistic $446.50.

I was hoping that Hyunho might have added something to the thread, but as he hasn't, I'll do so myself. If you read the later comments and replies in his Instagram post, you'll see that I pointed out, in my typical 'matter of fact' manner, that the Galaxy CC8002A, being manufactured by Orient Korea, would have used the re-branded Orient J3920 rather than a Seiko 7A38 movement, per se, as implied by his original lengthy caption. As you can see from his replies, it transpires that Hyunho's example is actually fitted with a Seiko 7A38 movement: 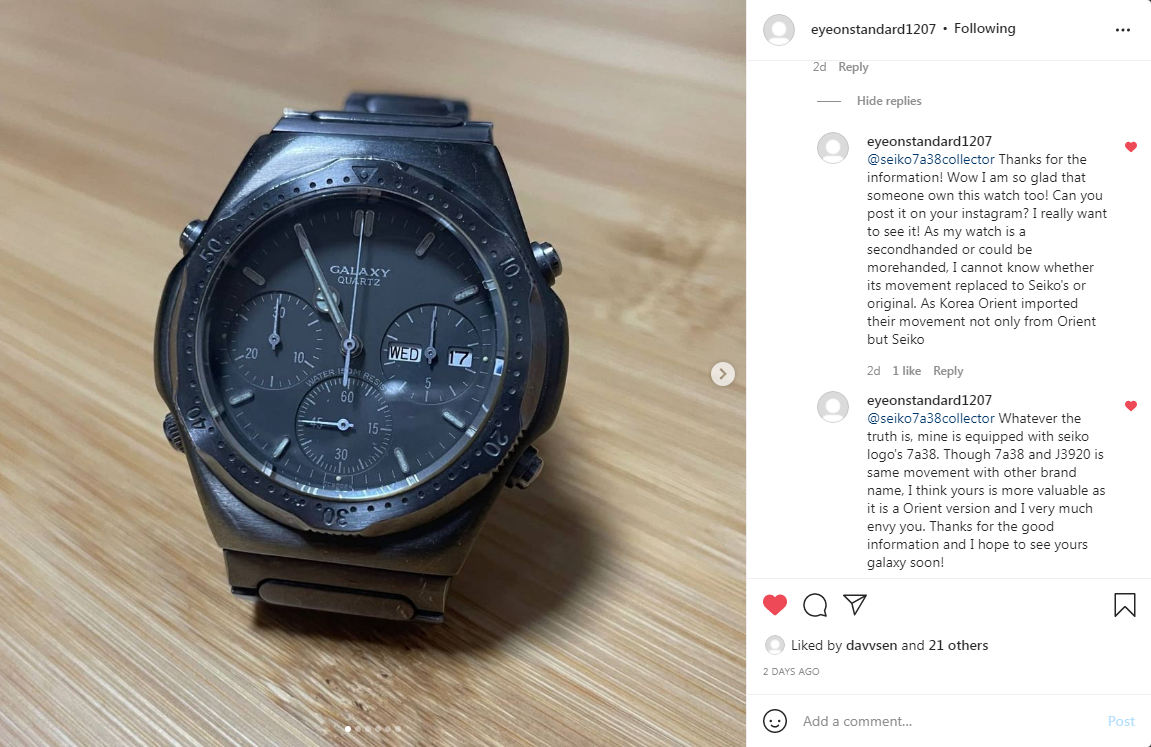 My assertion is based on the fact that all three examples listed on eBay between November 2013 and February 2014 by Korean seller Kwonbax (and his temporary alias smith_speaks) were fitted with Orient J3920 movements:

The movement photos admittedly aren't the best and the first 'head only' watch had certainly been messed about with, having been fitted with non-original replacement hands (from a Seiko 7A38-7289), but the Orient branded movements fitted do seem the logical choice. However, Hyunho's statement at the end of his first reply is absolutely correct:

its movement replaced to Seiko's or original. As Korea Orient imported their movement not only from Orient but Seiko.

Another consideration is that these Galaxy watches may possibly have been manufactured in different production runs. Note that the light-grey dialed version of CC8002A (like mine) does not appear in those two catalogue pages. Hmm.

Seiko7A38 wrote: ↑Fri Nov 19, 2021 6:34 amWell, actually it was only 8 years ago, on the old archived forum, where I started a topic with a slightly unusual title:
Galaxy 7A38 by Samsung (actually Orient) - an interesting rarity

The incorrect reference in the title to Samsung (which I wasted some time investigating) ....

Indeed I wasted an inordinate amount of time investigating 'the Samsung connection' in that old archived forum thread.


Now, thanks to Hyunho's photo of the catalogue page, which shows both Orient and Galaxy logos, there's absolutely no doubt that the Galaxy CC8002A (and CC6002A) were products of Orient Korea. However Kwonbax's incorrect assumption (of a 'Samsung connection') wasn't entirely without foundation. Before becoming the technology giant we know today, back in the 1980's Samsung did assemble / manufacture quartz watches, for the Korean market, both under their own brand name and others under licence. Hyunho explained in more detail in one of our earlier Instagram DM exchanges:

In 1980s, and 1990s SWC made a alliance with Seiko in order to upgrade their brand quality. They bring in parts from Seiko and assembled it and sell it under the name of Samsung Dolce. But it looks like they were making some Seiko watches as a kind of OEM way. There was a time that Korea watch company make watch parts like case or hands for other country's watch company like Seiko, Timex and so on.

I saw a post (though I cannot check authenticity) which says SWC even did assembly production of Seiko movements up to 5T52 which is mounted on Seiko World Timer.

I attach some Korea SV (I cannot find meaning of 'SV' though) Seiko watches to you. SWC even assembled other brands.
These are pictures of a Samsung Longines watch I saved from a Korean auction.

I've gone right through that old forum thread, checking whether all the links I'd embedded in it at the time still worked. Unfortunately quite a few no longer do, including the old flash driven Orient Korea / Galaxy website (dating from 2011).

One link I hadn't included in the old forum's thread was to a thread on WatchUseek, which didn't start until September 2015, nearly four months after I'd made my last post.


I was surprised to see there had been a few more posts added earlier this year (both by South Korean posters):


This one was added only a month ago. I wonder who the knowlegeable poster Orientgalaxy of Korea might be ?


Another poster gave a link to what appears to be Orient Korea's current website: http://otw.co.kr/m/main/main.php
That may possibly be a mobile version - this full screen version looks slightly better.
Top

Seiko7A38 wrote: ↑Sun Nov 21, 2021 9:07 amMy assertion is based on the fact that all three examples listed on eBay between November 2013 and February 2014 by Korean seller Kwonbax (and his temporary alias smith_speaks) were fitted with Orient J3920 movements:

Seiko7A38 wrote: ↑Sun Nov 21, 2021 9:07 amAnother consideration is that these Galaxy watches may possibly have been manufactured in different production runs.

Well I think I've just eliminated that possibility. The three grey dialed Galaxy CC8002A's sold by Kwonbax had case-back serial numbers: 7O0349 (mine, swapped by Stuart Lennard, from the first 'head only'); 7O0596 (the aforementioned) and 7O0723, so all manufactured in October 1987. Hyunho's cropped Instagram photo of his watch's case-back didn't include the serial number, so I asked the question. He replied: mine is 700196. 150 units earlier in the same month's production.
Top

Here's the uncropped version of Orient Galaxy 7a38 catalogue page which I could not send to this site's host.
I hope this helps for his research.